Planning is Half the Fun 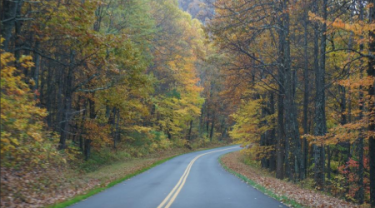 In seven months and one week, our family of 5 will head ‘Out West’ on one epic family road trip. I have to say I am dreading the “He’s touching me!” and “She crossed my imaginary line I drew in the seat!” and “He is smacking his gum!” arguing. Yeah, I dread that…but I am looking forward to the experience.

On the front end we have been planning this in the back of our minds for years; slowly waiting for our youngest to get a little older so we, the parents, would enjoy it, too. I have read of others who take the little ones, but I am not one to want to haul diapers, formula, and grouchy littles-who-need-a-nap around. Our youngest is ready, or as ready as he will ever be, and we will only have our oldest around for a few more years. On the final end will be the memories made. It’s the middle part we are gearing up for: planning, buying, saving, and anticipating. Before I jump into that, get to know us.

night at the baseball field 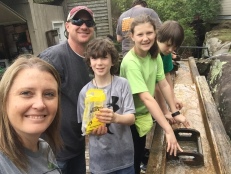 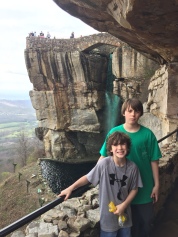 when the hay gets baled

that one time at Rock City

delirious from lack of sleep 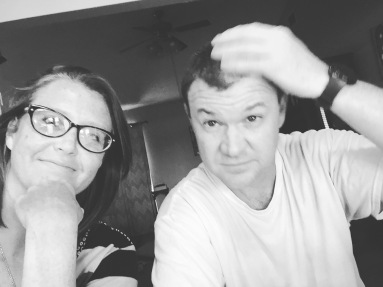 let me fix my hair 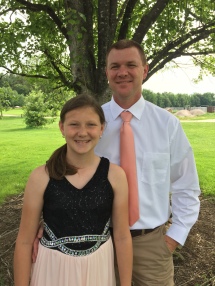 the trail that never ended 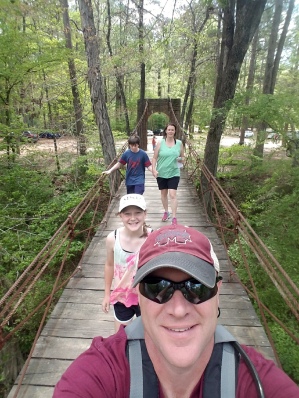 Chris (Diddy) and Janet (Mama): We met in 1995, married in 1998, and it is almost twenty years later. We have been on some incredible adventures together (more about that later) with the most incredible of the adventures being parenthood. We loved to travel before we had kids but due to living in an area where we had no close relatives our travels were put on hiatus a bit. Before the kids we would go random places a lot and planned trips as well. We slowly started traveling more once the youngest was out of diapers. Diddy (not Daddy) works for the phone company. He cannot do anything about your cell service but he can splice 2400 pair of wires in the hot sun, rain, sleet, snow, and hail like a robot. Plus, he looks really cute dressed in his harness, hard hat, and hooks climbing a telephone pole. Luckily, he has worked there long enough to collect a lot of vacation days. I am a teacher so having summers off is a plus for our travels. Chris cannot sit still. When he is not at work you can find him fishing, hunting, building tables, or listening to books on tape. His words to live by are: 1) Be humble. 2) Listen more than you speak. 3) Never sit still. If I had a code to live by it would be simple: Be lazy. I like to read, watch movies, raise chickens, and I love my job. Chris and I lead the college & career class at our church. We have been several places with the students volunteering. They are like our second family. We have had students come and go due to growing up, moving off, getting married, and having kids, but they will always be our “Big Kids.” Now time to meet our personal kids.

The teenager: Our first born, Ryan, is pretty funny. And cute. And smart. He is 13 and a half and knows everything. That is why his phone gets taken away a lot. He toots the saxophone, watches funny videos on YouTube, and plays lots of video games. Ryan loves little kids that don’t live in his house and will volunteer at church in the nursery, toddler room, and during VBS. His teachers think he is weird and funny. (Example #1: Our IT guy at school said once he was minding his own business hooking up a fellow teacher’s printer and was sniffed by my son. Example #2: The Spanish teacher has a drawer full of items Ryan has given her: fishing line, little sticks, wrappers. Once he did buy her a cupcake at the Wal-Mart. I really thought he was going to eat it and give the teacher the container it came in.) He is pretty excited about the ultimate road trip but says his picture will not be on the internet. Diddy told him just wait until we buy the Go-Pro. He is also a hypochondriac so it will be exciting to see what random western illnesses he contracts and diagnoses via WebMD.

The girl: Fourteen months after Ryan came the girl. Haley is the sweet one. As a baby she was calm and easy-going unlike her dramatic, only-my-way brothers. Now, she still is calm and easy-going. She is not into girly things but loves to fish, hike, and swim. Haley’s very adventurous and wants to one day go sky-diving. She loves her Diddy and they are two peas in a pod. She is organized, cares about her grades, and is pretty quiet. She just finished her first year running cross country. She ranked in the top five for her team during each race. Haley even made top 10 overall in one race! She loves to serve on mission trips and loves animals. She is a hard worker, and loves to listen to music.

The little one: After a long, long wait for another kid, along came Carter. He was named after Sheriff Carter on the SyFy show Eureka. He is very energetic and loves sports. His favorite sport right now is baseball but he starts playing basketball next month and will play flag football next year. He is the baby of our family so he does tend to get his way a lot. The older two often comment, “If I had done that when I was his age….” He loves to fish, make his own trails through the woods, and climb trees. You will find him outside most days getting in to something.

That’s us. All five Barefeet.