Top Places to Eat at Disney

Ryan says to just get a plate and eat only mac & cheese. That’s basically what he did although he enjoyed a few other items. The rest of the family enjoyed it, too, and we will definitely go back. I was most excited to see the characters! It’s hard to get reservations so as soon as your reservations “open” try and get a spot. The restaurant is buffet style with a mini-buffet for kids. The food was wonderful!

We eat breakfast here every time we come to Disney. It is our favorite. (It used to be my favorite and Ryan’s, too, but we found the Crystal Palace.) Tusker House is in the Harambe Village part of Animal Kingdom. We get reservations for about 8:30-9:30 a.m. Mickey, Minnie, Donald, and Goofy make appearances while you enjoy an all-you-can-eat breakfast. The best thing about Tusker House is the Passion Juice. Chris & I enjoyed Passion Juice in Kenya and did not think we would ever taste it again. Tusker House’s juice is the next best thing.

We ate here once at 9:30 p.m. We had reservations over 2 months in advance and we were not seated until after 10p.m. Because of their mistake we were invited to the color-changing ice cavern. Carter LOVES dinosaurs so it was the perfect place for him. There are life size dines and a fossil dig. The food was good, too. The rest of us enjoyed it, too. 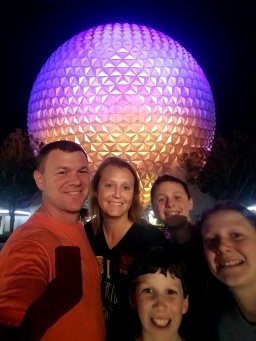 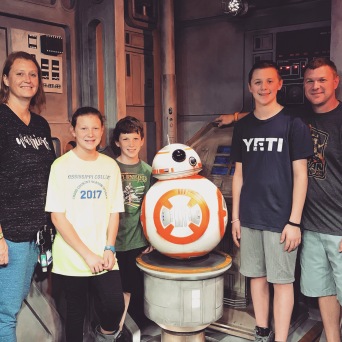 Other places worth mentioning:

The Turkey Leg – This is not a restaurant but a cart/quick stop you have to find. We always buy at least one and share.

Nine Dragons at Epcot (Chinese) – We booked Nine Dragons as a part of Disney’s Candlelight Processional. I was shocked Chris booked this without us knowing but pleasantly surprised. Our dinner was at Nine Dragons then we each received a ticket for the processional which started at dusk. It was so beautiful! We listened to Neil Patrick Harris narrate the Christmas story while a 50-piece orchestra and choir played. I really enjoyed it, but I like orchestras and such. The Chinese food was okay. I would eat there again but the food was just so-so. They gave us a lot of food! The service was great! 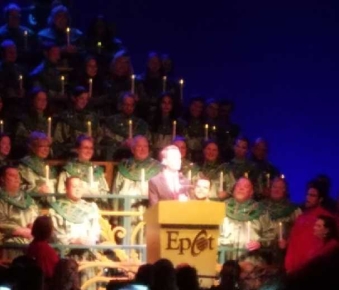 Garden Grill – Adult’s only unless your kids like “fancy” food. My kids do not. Their noses snarled up even at the kids menu. This restaurant rotates and Chip & Dale make appearances. We have been here twice, but probably will not go back again unless the kids are not with us.

Hollywood & Vine – We went here once when Carter was little. He loved Jake and the Neverland Pirates and some other Disney, Jr. shows. These characters walk around and the restaurant has a good kid’s buffet. Chris and the kids liked this place mostly because of the dessert buffet. It wasn’t my favorite. There were a LOT of little kids running around. I’m sure it wasn’t chaos but it seemed that way.

Places we want to try but haven’t been able to obtain reservation:

La Hacienda de San Angel – We call it the Mexican Pyramid. This spot is always booked during days we are at Epcot. We hope to visit it soon! There’s a ride inside the pyramid that we ride to get out of the heat and the food smells delicious.

Be Our Guest Restaurant – because Beauty & the Beast is my favorite. I think people set alarms so they can reserve this place. I have never even seen an opening here!

We have been to other places, too, but these are a few of our favorites!

One day Chris and I want to spend a whole day at Epcot trying food at every country. Has anyone done this?