The One at Thanksgiving 2019

Skip the little things so you can do the big things.

Earlier this year we talked about going back to Zion National Park. The whole family rated this park as one of the top places we have been to. We decided to try a fall/winter trip to cut down on the number of people that would be visiting the park. We had signed up to receive emails from the park lodge and waited until the lodge had a sale on rooms. (By the way, there’s a sale now on lodge rooms for a December or January visit.) We booked a three night stay inside the park. We started saving our Exxon points on gas for this trip and by the time we left we had enough points for 4 tanks of FREE gas.

The drive from Mississippi to Utah is a twenty-four hour trek. The kids do not mind because they watch Netflix, Prime, YouTube, or Disney+. Chris and I don’t mind the drive because we enjoy the scenery and decided to listen to the Eragon books on Audible. (Plus Chris does most of the driving.) We stop periodically to get out of the car, too.

We have signed up for all hotel reward points and use Expedia points as well. The points add up! We check Expedia against hotel websites and get the better deal. We have had the best luck with Hilton and Best Western and Expedia rewards. If you don’t mind doing the research, patiently waiting, and comparing rates you can really save money. I do this while Chris drives.

We already had our hikes in mind we wanted to do from our last trip to Zion and had all the gear we needed. Haley had to buy new hiking shoes because she had outgrown her others and we needed a couple sets of thermal/wool long johns. Everyone needed warm gloves. Chris ended up buying a smaller cooler for this trip. (Last Easter weekend someone pulled out in front of us and we totaled our Nissan Quest – my baby! We ended up buying a used Nissan Pathfinder which does not have as much room as our Quest did. Therefore, we contemplated buying a cargo carrier for the top of the Pathfinder but after much consideration and reviews went with a smaller cooler and less luggage to save money.)

So we saved and skipped the little things so we could add up to do the big things.

Of course, we stopped for our PB&J lunches. The kids wanted deli meats but with the smaller cooler we really didn’t have room for the condiments, cheese and meats. We enjoyed watching this guy at the travel center in Oklahoma. 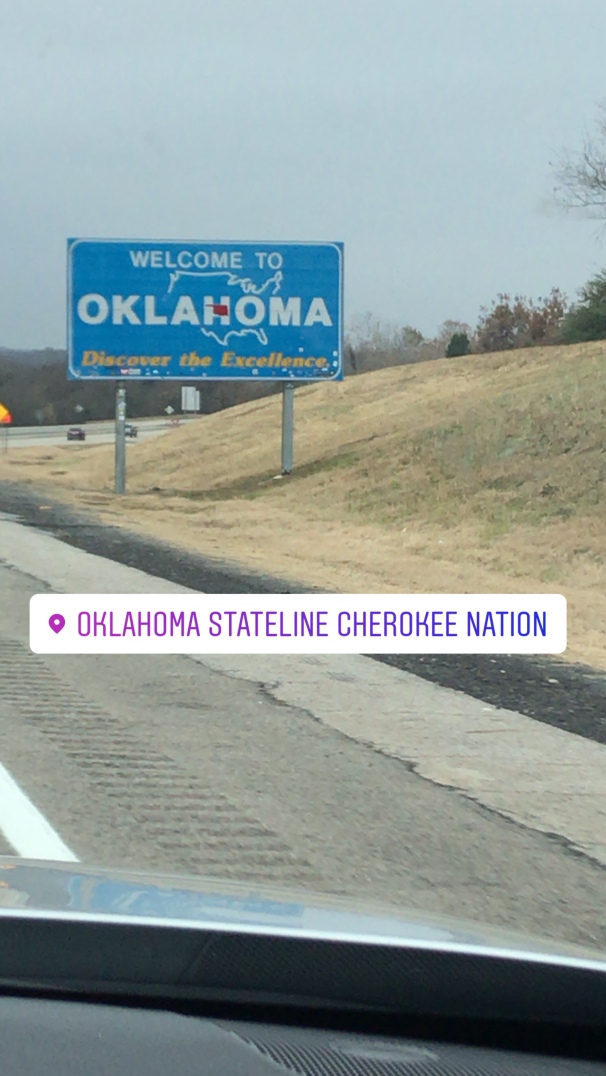 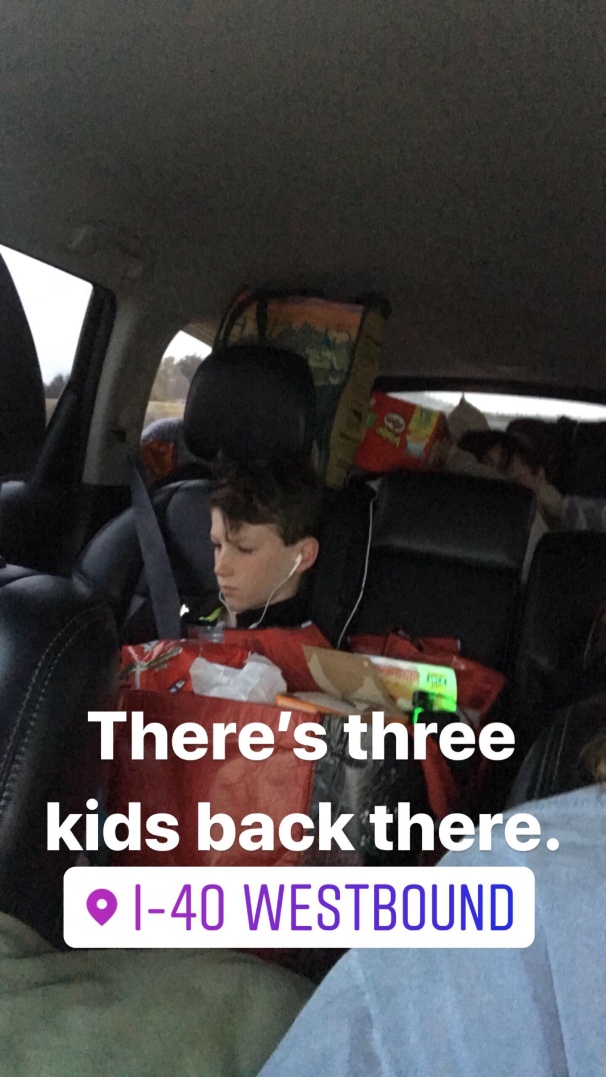 The first day we got up at 3am and drove for 15 hours. I think that’s the longest we have ever driven in one day and we do not ever want to do it again. 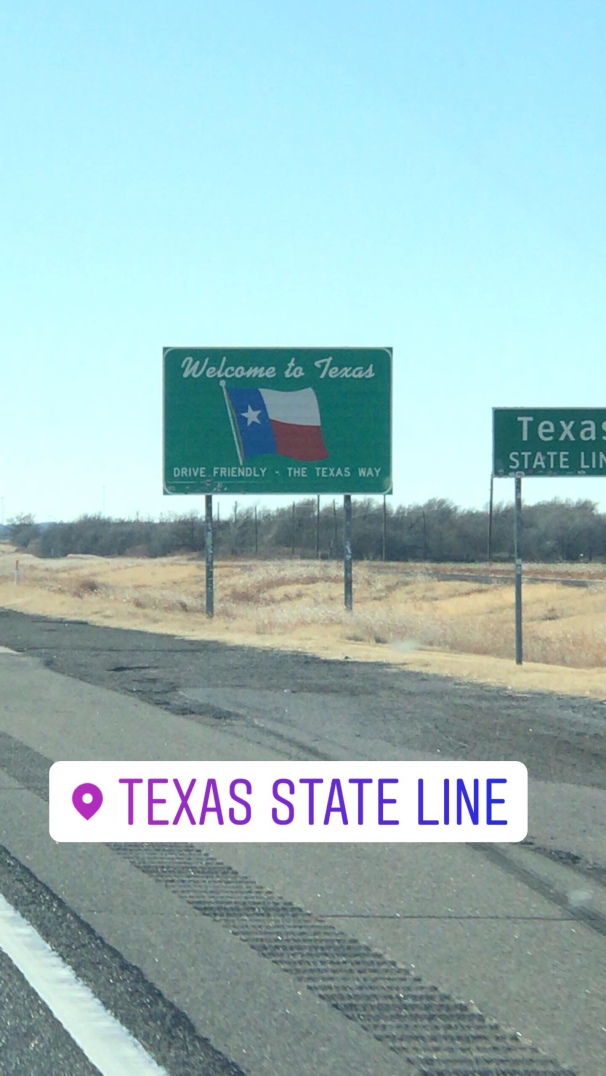 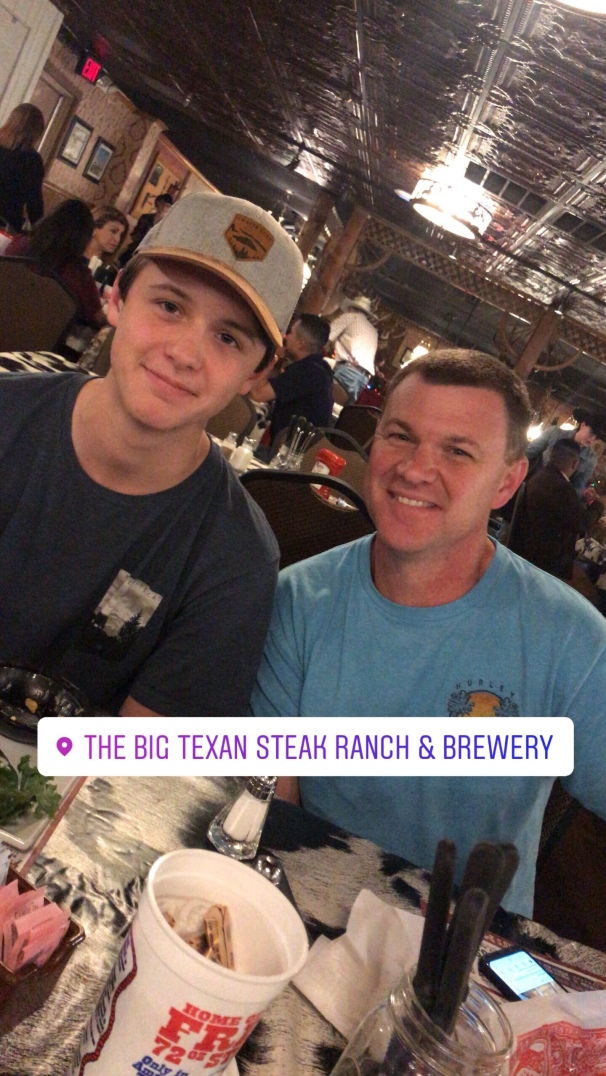 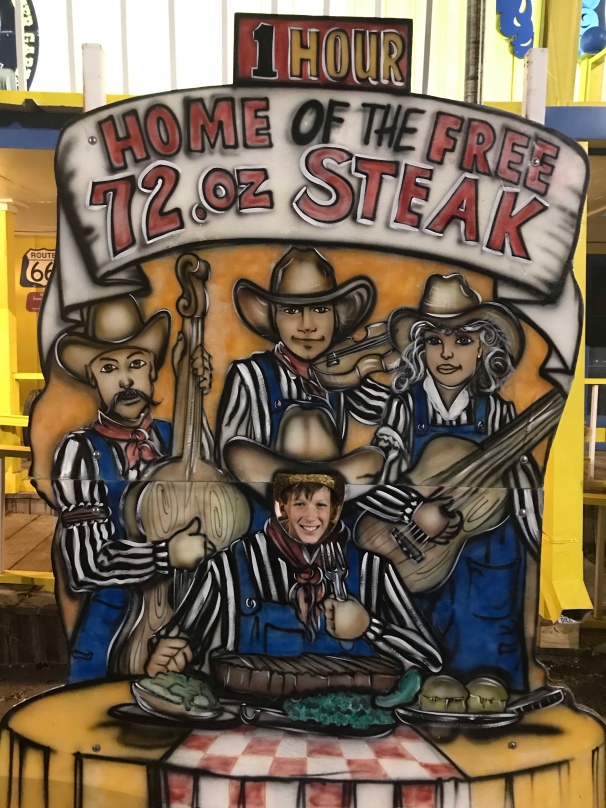 Everyone wanted to eat at The Big Texan again. Then we hit the road to make it across the state line to New Mexico. This La Quinta was super nice. Santa Rosa is home to the Blue Hole. The kids said they did not mind jumping in again even though it was super cold outside. I vetoed their attempt. 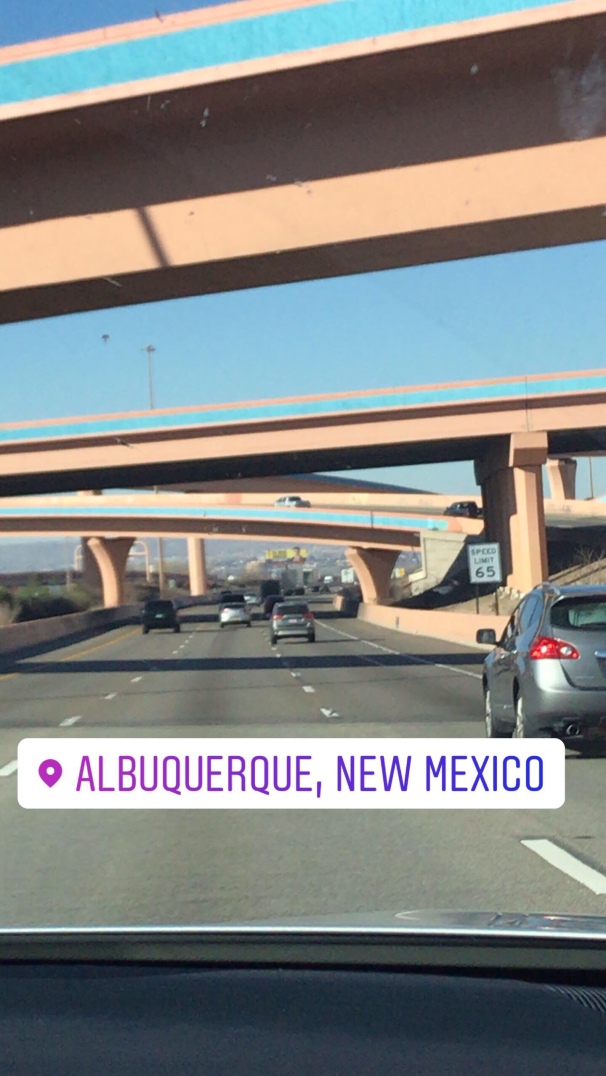 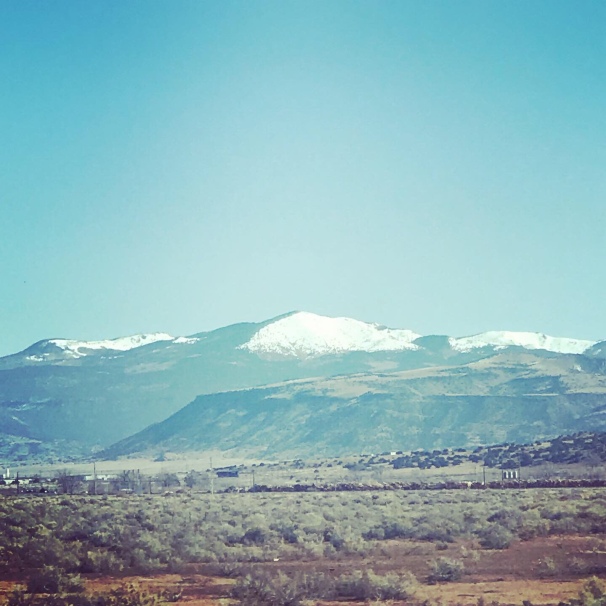 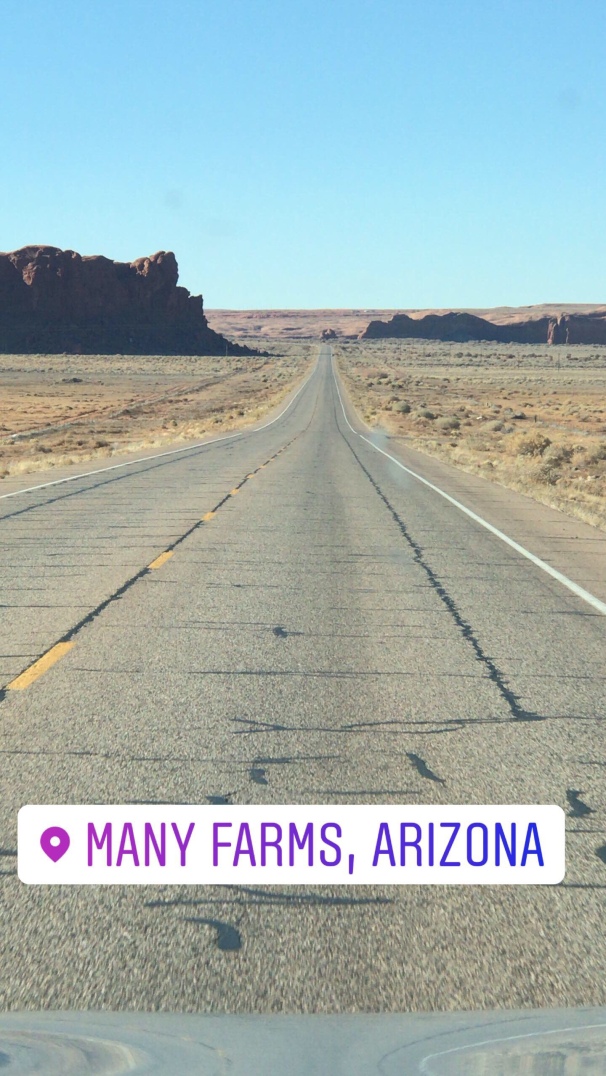 We finally made it to Arizona. I booked a unique stay on Airbnb for the kids. Chris and I LOVE looking at the stars. In Mississippi there are too many lights and you can’t see ALL the stars. I found a hogan that was warmed by a wood burning stove. The owners were very accommodating. It is very hard to find sleeping arrangements for five people. The owners had an extra cot they put in the hogan for us. The land is located south of Page, AZ and no lights taint the sky. At night, you could see ALL the billions of stars. If you ever have a chance to see the stars on a clear night in the desert. DO IT!

The owners were super nice people. Their land was a part of Navajo land as the owner was a descendent. She told us a very sweet story about her grandmother and how the particular hogan we were staying in was where she lived for a few years as a small child. The hogan eventually became a place for ceremonies and celebrations. They had updated the hogan but the original frame was underneath. 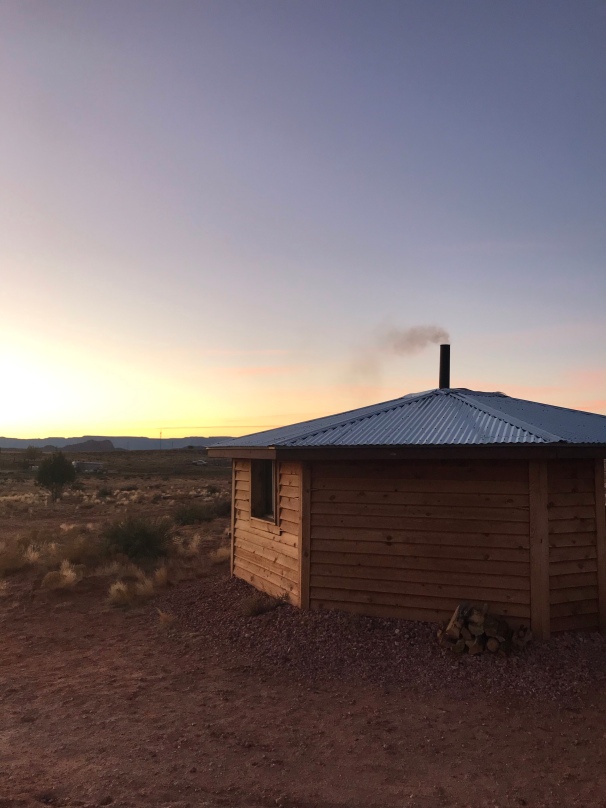 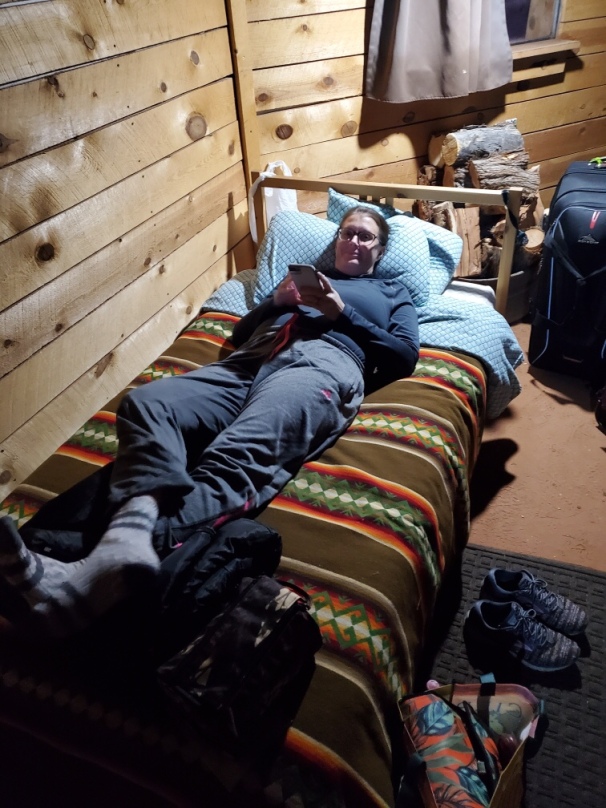 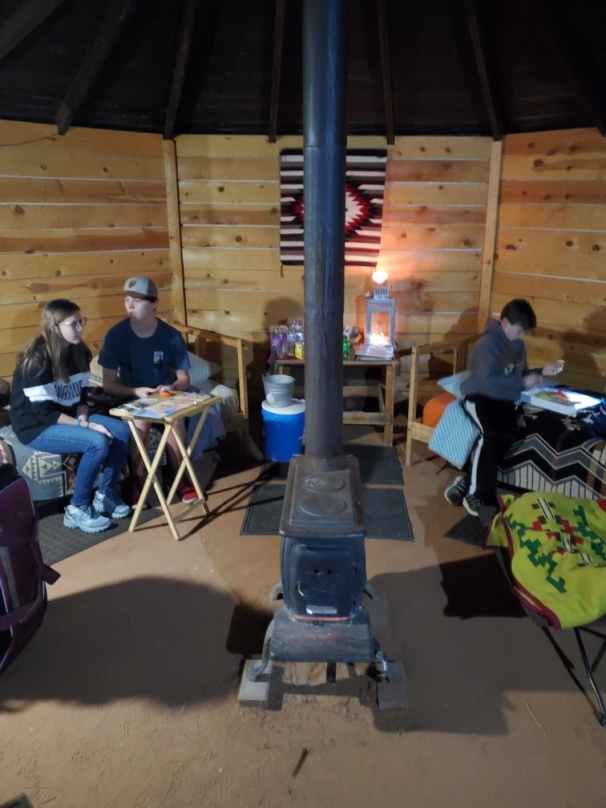 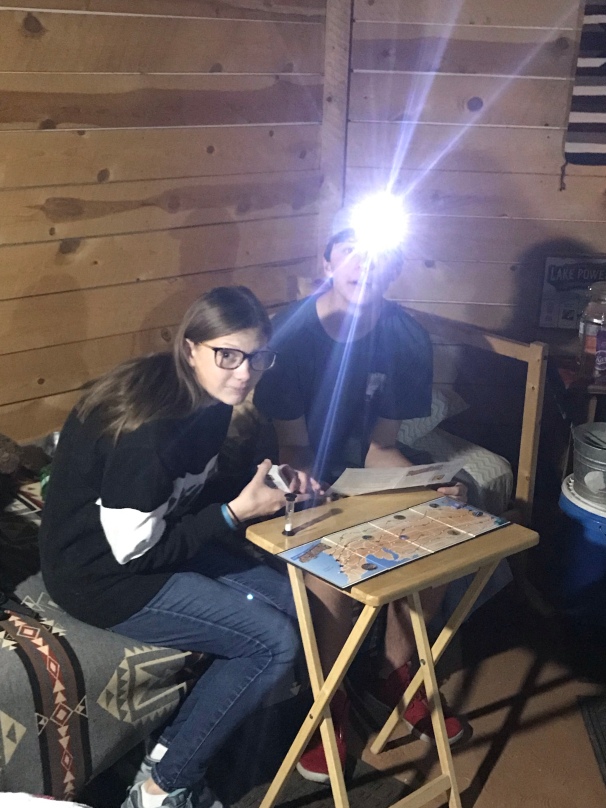 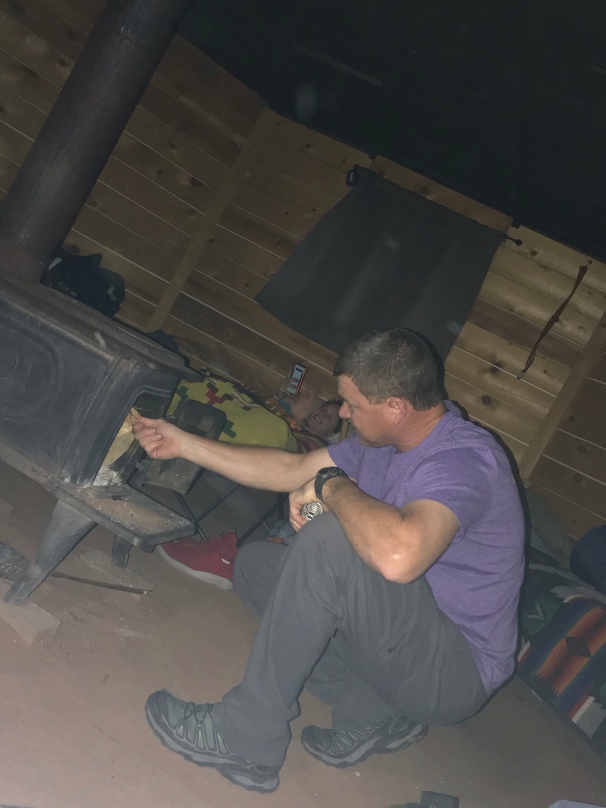 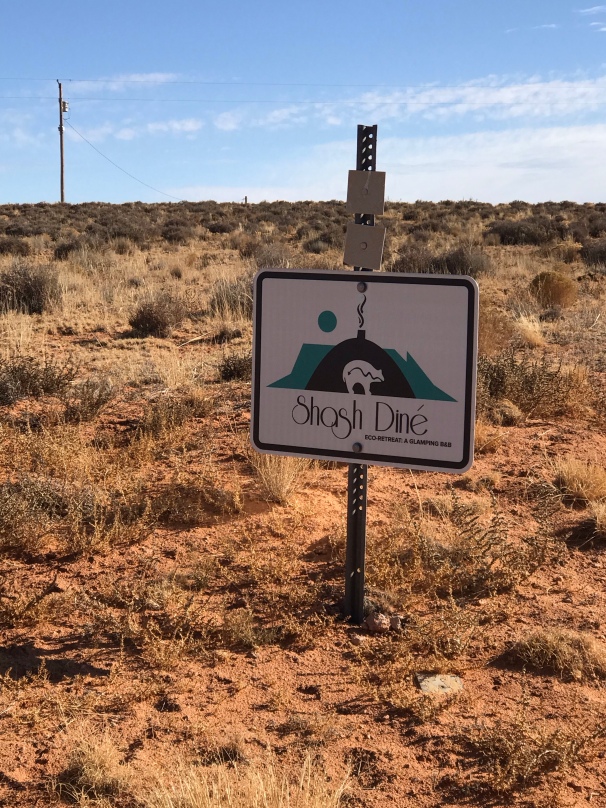 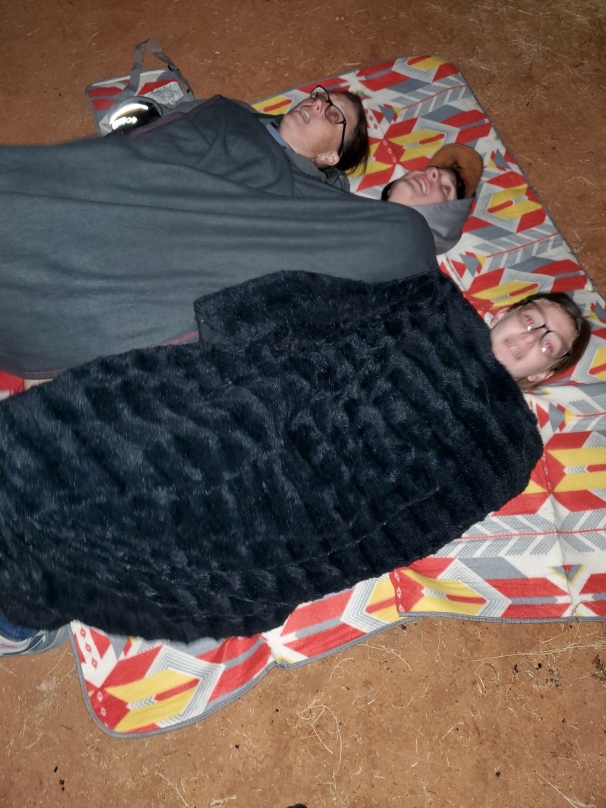 We had no running water here. The owners had Navajo Tacos (our favorite!) delivered to us for supper and in the morning we had fresh fruit and muffins. There was a port-a-potty (very clean) available and an outdoor fire pit. We opted to lay outside for just a bit to see the stars until we were so cold and could not take it anymore. The kids said this was their second favorite house we had ever rented (the most favorite being the house we rented in Crescent City.) Chris got up about every two hours to put wood in the stove. We all had our own twin bed and they were so cozy! The morning after we took a small hike up the hill to overlook Lake Powell and Page, AZ. Then we packed up making the last leg of our journey to Zion. 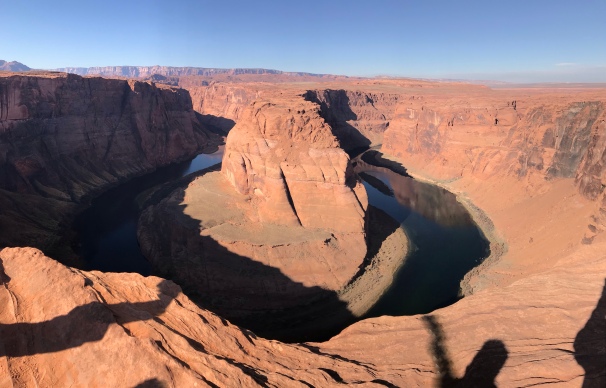 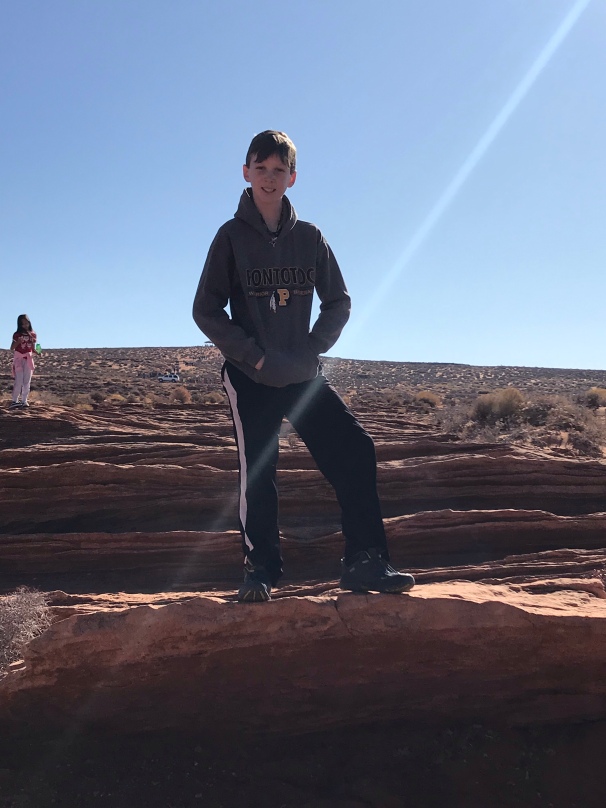 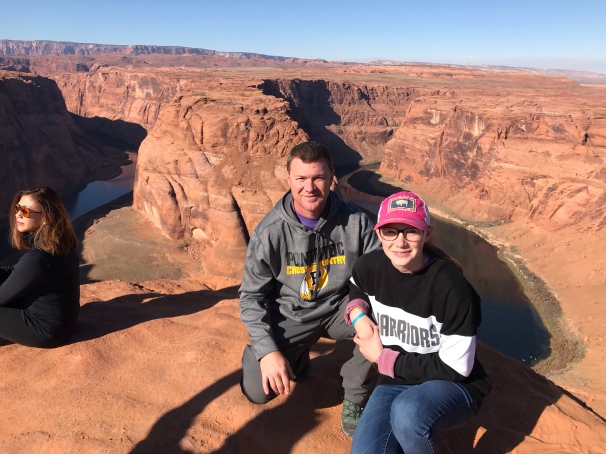 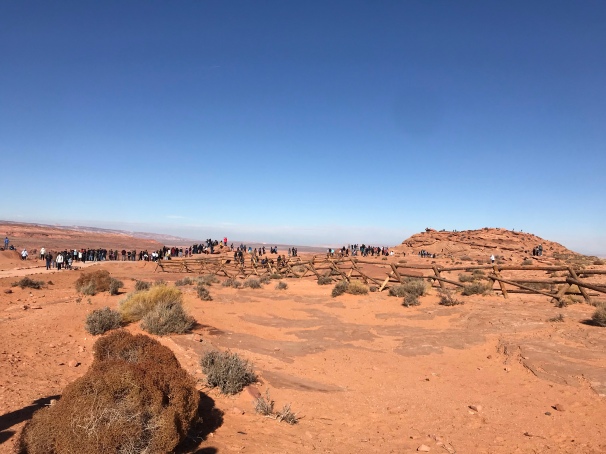 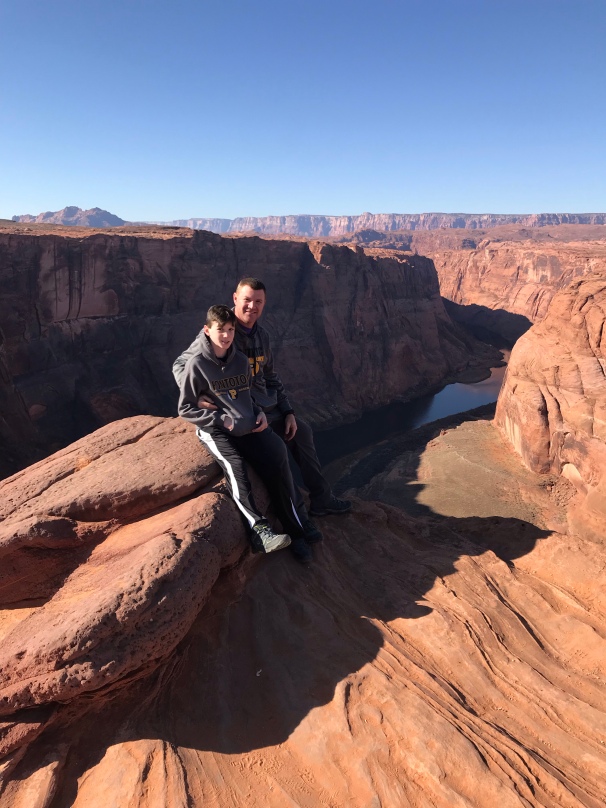 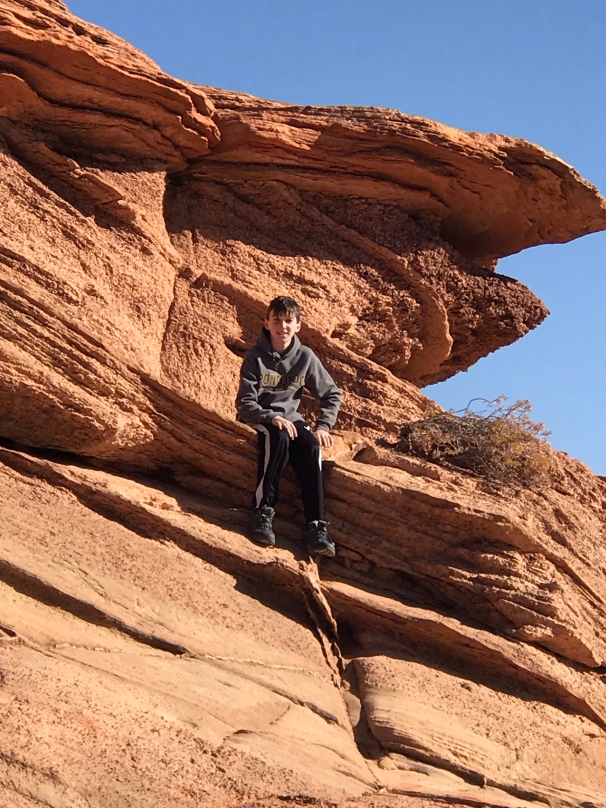 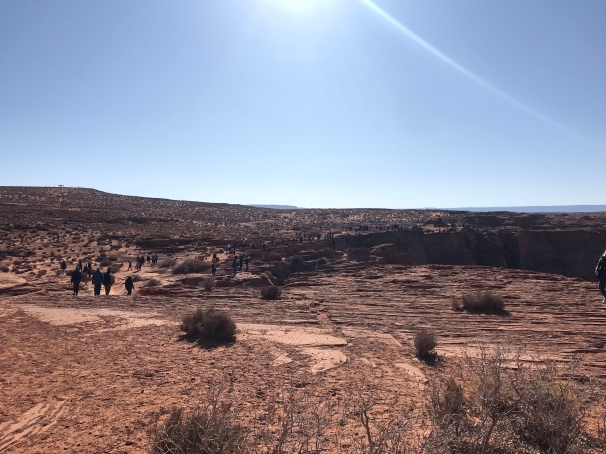 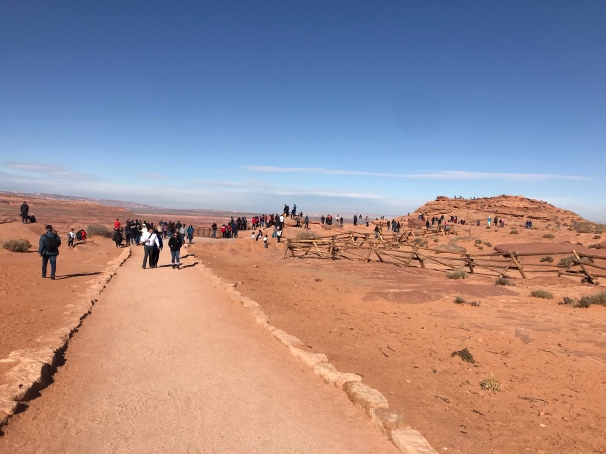 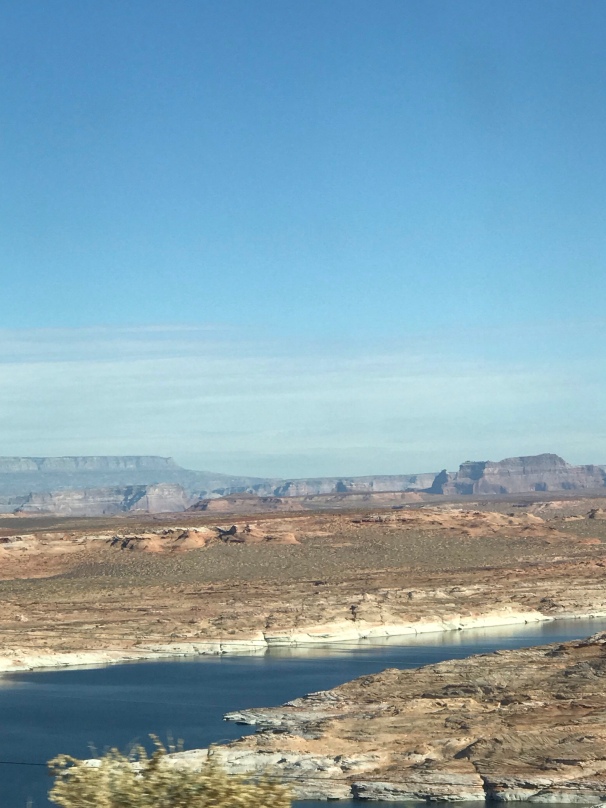 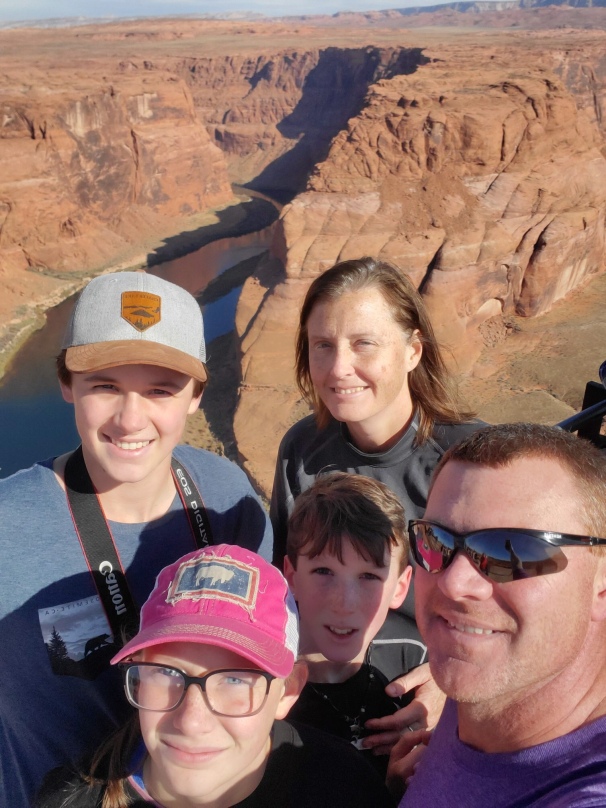 We were only ten miles from Horseshoe Bend so we stopped. Here you just pay $10 a car and walk maybe a half mile to the overlook. There’s a large climbing rock to the right. I tend to be heavily afraid of heights and think the worst is going to happen so Carter and I spend most of our time near the huge rock allowing Carter to hone his climbing skills.

I was amazed at how popular this site was in November. You can see how many people were walking around the overlook! It’s even busier in summer! Our family absolutely loves Page. We plan on renting a houseboat one day for a week in the summer. Chris signed up for emails from a local marina so we are waiting on the right summer deal to come along. 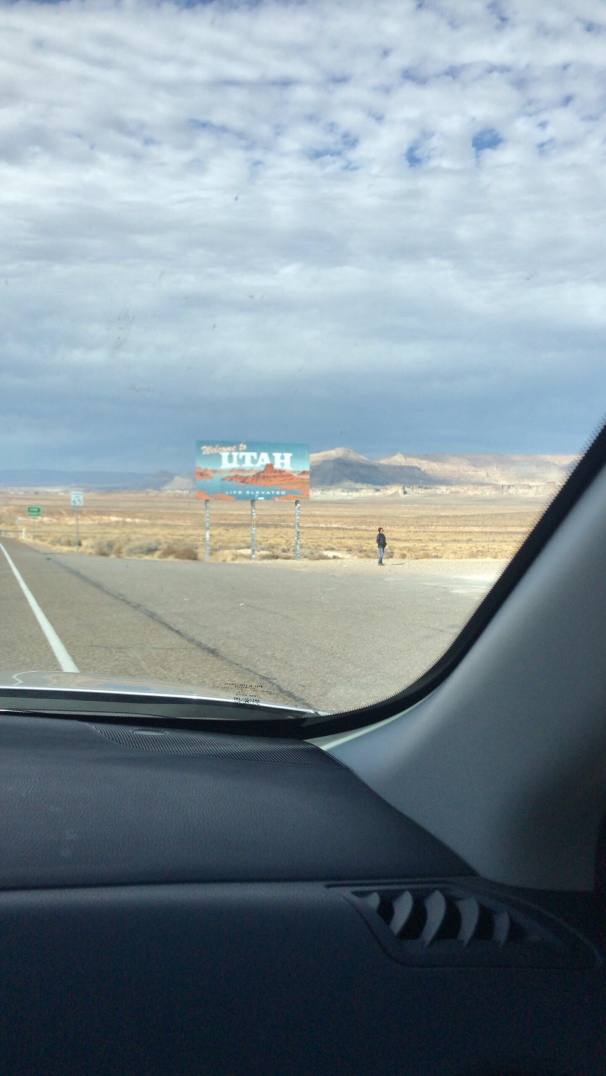 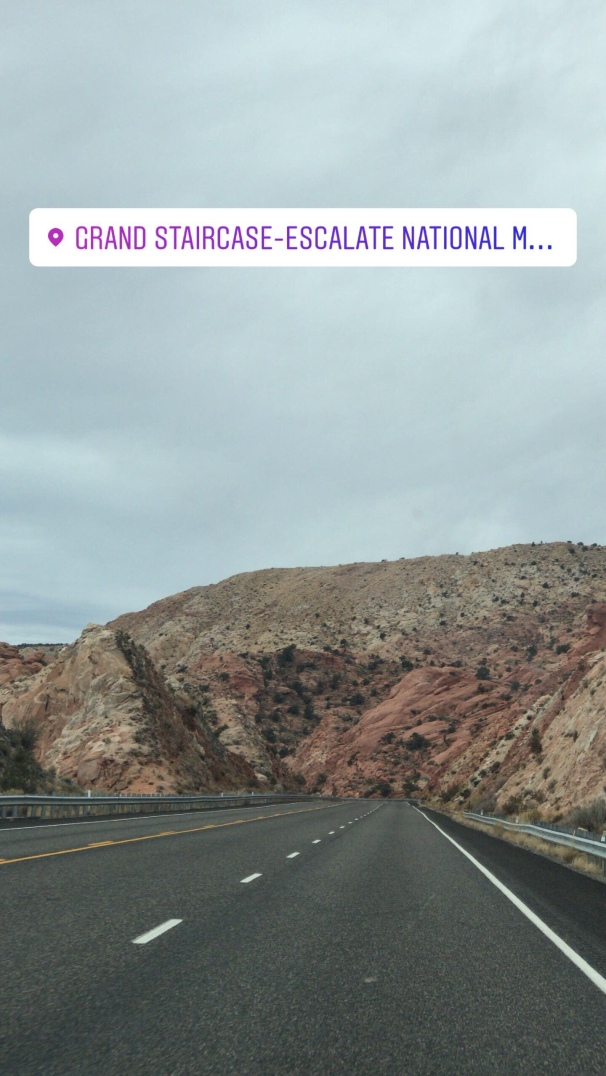 I beg Chris all the time to move to Southern Utah. It is so pretty! This is where he promises we can get a retirement home.